Over 500 photographs of the Royal Forestry Corps digitized and published 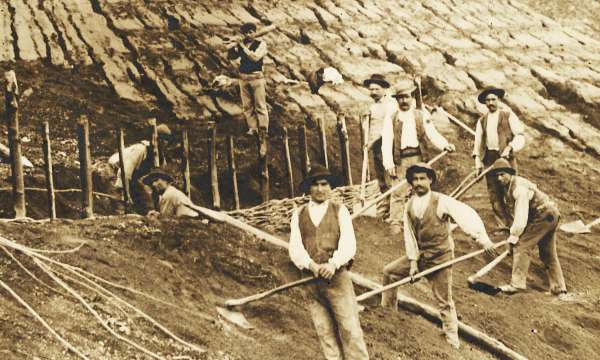 The Museo Galileo and the Library of Technology of the University of Florence publish a first version of the collection of over 500 photographs of the Royal Forestry Corps, preserved at the headquarters of the School of Agriculture and now present both in the Museum Digital Library and in Chartae the archival portal of the University. The Royal Forestry Corps photos are part of a larger Forestry Collection, consisting of hundreds of positives, glass plates, and stereoscopes, whose restoration has begun.

The collection of the Royal Forestry Corps consists of large-format silver bromide jellies mounted on cardboards and can be dated between the end of the nineteenth century and the first quarter of the twentieth century. It is an important testimony of the activity undertaken by the Italian forestry institutions to counteract the hydrogeological instability caused by deforestation, in a crucial moment of transformation and recovery of the mountain landscape in Italy. In particular, the images document hydraulic systems and reforestation carried out by the Royal Forestry Corps the body which, until 1926, was responsible for the protection of the territory, especially in the mountains. They are an important example of the use of photography in technical and scientific fields at early dates. The application of photography to silviculture was promoted and experimented with by the Royal Forestry Institute of Vallombrosa the institution that trained all the forest rangers of the newborn Kingdom of Italy.

Incentivized by the Ministry of Agriculture, the photographs of the Royal Forestry Corps were also used to promote the activities of the Corps and to inform the public about issues related to the protection of the mountains and forests. They were also used as illustrations in several publications of the Italian Touring Club.

The collaboration between Museo Galileo and the Technology Library has as its objective the knowledge and valorization of the Library's vast photographic and bibliographic heritage.

The work of digitizing and cataloguing the collection will continue with a new publication by the end of the year.